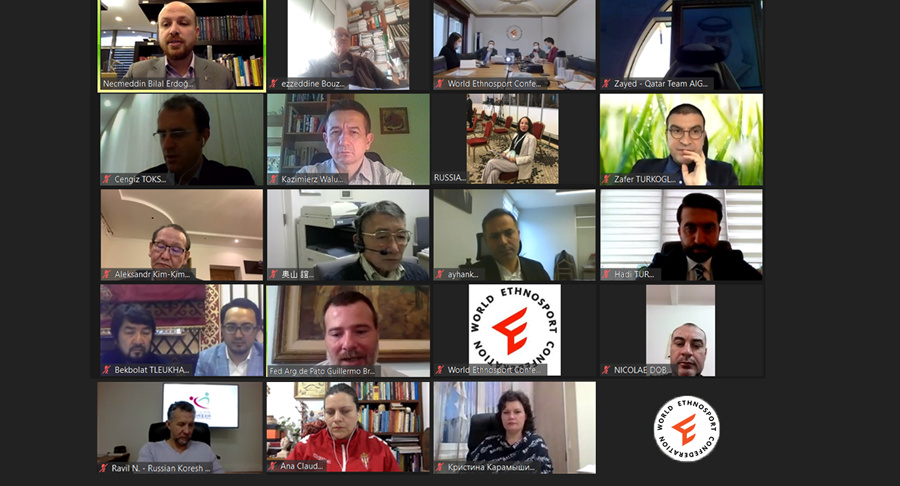 WEC Members Gather Together for the Second Time

Members of the World Ethnosport Confederation (WEC) have come together at an online meeting. The meeting, where WEC activities were discussed, began with the opening speech from President Necmeddin Bilal Erdoğan.

We Promote Traditional Sports
Addressing WEC members, Necmeddin Bilal Erdoğan said, “We continue our efforts to have Traditional Sports be presented in all countries. We have taken significant steps on a wide range of topics such as the 3rd Ethnosports Forum, Regional Committees, Doctoral Scholarships, and the Executive Board of Traditional Sports and Games.”

Kazakhstan Prepares for the 2021 Nomad Games
Speaking at the meeting, President of the Kazakhstan Ethnosport Federation Bekbolat Tileukhan expressed, “First of all, I would like to thank the Central Asia Regional Committee Presidency for deeming me worthy. Due to the epidemic, 2020 has been difficult for us all and we’ve had to postpone our activities. Yet we look to the future with hope. We as Kazakhstan continue our preparations for the 2021 Nomad Games. At the same time, we will also participate in the 2nd World Kökpar Championship. We look forward to the support from all our members.”

Traditional Sports Being Promoted in Yakutia
Referring to the studies that have been done, President of the National Sports and Games Association of the Republic of Sakha from Yakutia, Aleksandr Kim-Kimen stated, “We have performed systematic studies this year. We have formed the Central Asia Committee. We have organize activities and competitions for the development of traditional sports in Yakutia. We are planning to organize a festival in the area of Traditional National Sports in 2021. Despite all our events having been delayed due to the epidemic, we look forward to 2021 with hope.”

Youths Will Receive Archery Training
Referencing the works carried out since 2019, President of the Traditional Turkish Archery Federation Cengiz Toksöz expressed, “We held our meetings and seminars online in 2020. We signed the Traditional Turkish Archery Protocol with our Ministry of Youth and Sports, and archery training will be provided to all youth camps and centers.”

Elderly Centers Project in Tunisia
Ezzedine Bouzid, President of the Association for the Preservation of Tunisian Games and Heritage Sports, made a speech about the projects being planned in Tunisia. Bouzid said, “We have a project for elderly centers, and we think it will be beneficial for their health. We are performing studies on finding new methods regarding how to be able to convey traditional sports to future generations.”

The 2020 Russian Koresh Championship Has Been Held
Emphasizing Koresh, the national wrestling style of Turk peoples, as the Russian National Sport in 2013, Vice President of the International Belt Wrestling Koresh Federation Ravil Nogumanov mentioned, “We organized the Russian Koresh Championship in 2020. We will continue our efforts in 2021 as well.”

Russia Prepares for the World Nomad Games
Emphasizing that the Siberian Malenitsa Festival had been held with great enthusiasm, President Kristina Kramyshina of the Russian Kökbörü and Sports Federation said, “We held horse riding competitions and wrestling competitions at the festival. We also simultaneously performed studies on preparing the legal documents for participating in international competitions. We plan to represent Russia in the 2021 World Nomad Games not just in Equestrianism but also in other types of sports.”

The Message of Togetherness from All Members

The other members who attended the meeting expressed their regret regarding activities being postponed due to the pandemic by providing messages of togetherness. The members stated they will continue their efforts and look with more hope toward 2021. Also included among the participants were Vice President Komo Okuyama of the Mounted Archery Association, President Ana Claudia Garcia of the Traditional Sports and Games Federation of Mexico, President Guillermo Bracuto of the Pato Federation of Argentina, IMM Youth and Sports Manager Ayhan Kep, President Kazimierz Waluch of the Institute for Sport and Education Development (Poland), and World Ethnosport Confederation Secretary General Abdulhalim Aksu.