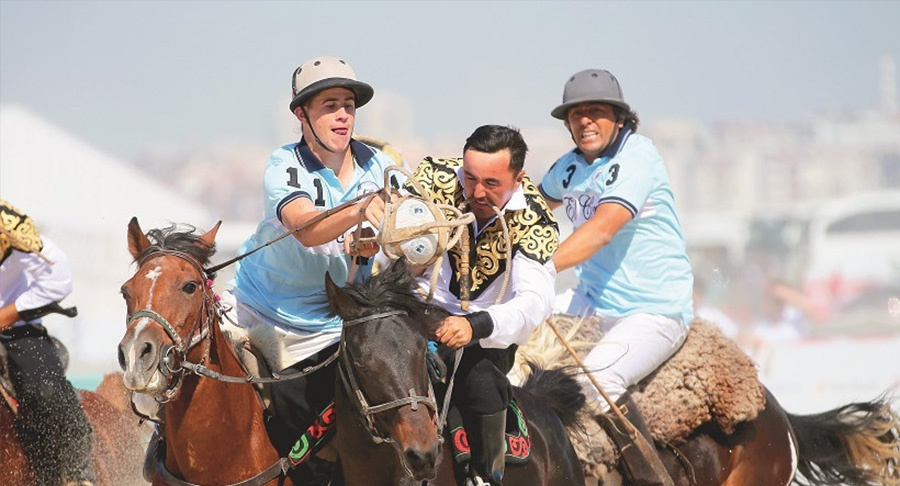 Fourth Etnosport Cultural Festival, which introduces the sports and traditions of Turkish republics and other visiting countries from all over the world. Times edited. In the festival area at Atatürk Airport, you can get information about dozens of sports, from wrestling to oka, javelin to horse riding, as well as the unique game experience. Today is the last day of the Ethnosports' most special guest was Argentina.

We watched two sports that brought together the cultures of different continents on horseback for four days. The Pato game, Argentina's traditional sport, is similar to our game called Kökbör. This game is called Pato, which means duck in Spanish because it is played with a live duck in a leather basket. Today, the "Pato" is played with a leather ball with six handles. The first information about Pato dates back to 1610. The collective knowledge among the public is that this game started because of the horses that came after the discovery of America. The set of Pato, which has become traditional over time, was declared a national sport by President Juan Peron in 1953. Pato's rules are as follows in a nutshell: wearing a helmet is mandatory in a four-person team game. On pitches that are 180 or 220 yards long, 80, or 90 yards wide, players can pick up the ball from the ground and continue the game. In Pato, the important thing is to throw the ball into the opposing team's pot. In the game, the ball can only be held with one hand, while in the bowl, it can only be used with the right side. No substitutions are made unless there are mandatory reasons such as injury or illness. The team that throws the ball into the opposing team's pot the most wins.

A Culture to Live in is Offered

” I don't feel as good on the ground when I'm on the horse, " said JuanIgnacioLanfranco, who is both interested in horses and plays Pato. The 52-year-old athlete, who has played Pato since he was nine, said: “I give food to horses, I walk with them... We have a lot of fun with horses. This is both essential to the sport, and I see taking care of horses as part of life. I look old, but when I go out on horseback, you'll see I'm not forced. I will continue as long as I am healthy. You have to be a good rider in this sport, so you avoid accidents,” he says. “You can recognize the culture that is heard, told, read here, " says Lanfranco, adding that Ethnosporus provides an excellent opportunity to explore cultures. Ethnosports offers a lifestyle. It is an aesthetic point of view that the Turks were buried with horses and that they did not see them as different from themselves. Unfortunately, we were unable to provide it. Even though Pato is our national sport, we can't get the attention we need. At one time, it was as beloved as football, but times have changed.”

The Value of Commitment to Roots will be Understood in Future

The president of the Argentine Pato Federation, GuilermeBarakuto, who continued his childhood acquaintance with Pato in his youth, is now working for the recognition of Pato in the world. Referring to Pato's dangerous and challenging game, Barakuto said, " I've heard about Kökbörü in meetings. In both sports, you have to be agile and careful on the field. Sports with high cruising pleasure. The resemblance between them is interesting. In Pato, we're talking about a sport that started with the discovery of America. There may also have been an amalgamation, possibly during migrations from Asia. This is an extraordinary situation. We continue to investigate the original records. I see other Turkish sports in Ethnosport. Watching Kökbörü Live was a special experience. We try to stick to our roots as much as we can in Argentina. Every culture is special. And here we see how much you claim your roots. We may not see now how important we are doing. But the importance of this commitment will be understood in time.”

The "Kökbörü" Game is More Difficult

Bautista Risso, who also serves in the Federation, travels from city to city to teach the game of Pato. Especially for young people to wonder about this sport is precious, stating that Risso, " Pato is enough to know how to ride a good horse. You can earn other features in a short time by working. I was surprised when I saw Kökbörü. I've been thinking about how this resemblance could have happened. Playing this game is harder than Pato. It needs a different kind of discipline and attention. It is excellent that the Turks have their history. So they don't lose the past. Turks are buried with their horses when they die; I know that. Especially in equestrian sports, we can't just think inside the field. We take care of their health, their feed, and their care. I'd say it's seventy percent of winning if you can steer horses well. If you keep your bond with the horse strong, you will be more successful in the match,” he says.