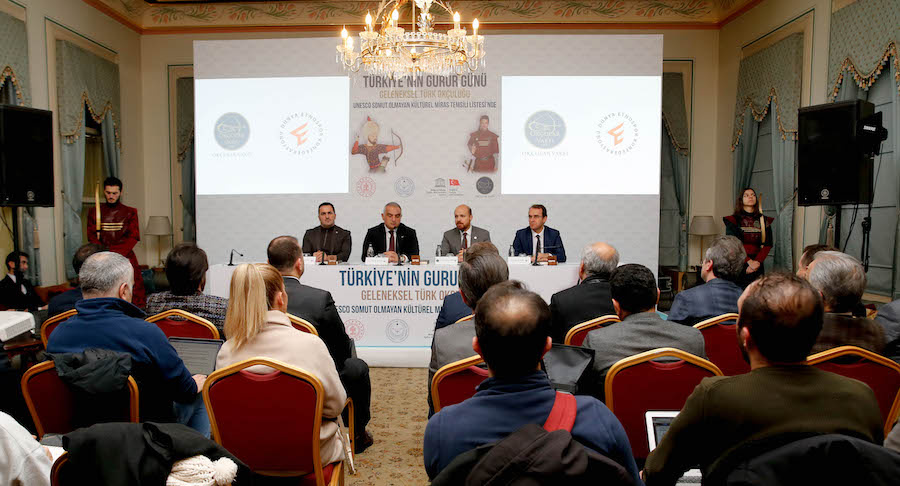 Traditional Turkish Archery has been accepted to UNESCO Intangible Cultural Heritage Represantative List that is an important initiative to keep cultural values alive. With the purpose of sharing this important success with public, there has been a press conference in The Archery Foundation, with participation of Mehmet Nuri Ersoy, Turkey’s Minister of Culture and Tourism and Bilal Erdoğan, Member of Archery Foundation’s Board of Trustees and President of World Ethnosport Confederation and Haydar Ali Yıldız, President of The Archery Foundation’s Board of Trustees and Beyoğlu Mayor and Cengiz Toksöz, President of Traditional Turkish Archery Federation and Member of The Archery Foundation’s Board of Directors.
Minister Ersoy who mentioned importance of UNESCO, said that “As you know, Turkey is amongst 5 countries who registered the most assets to heritage list of UNESCO. We have 18 elements those are placed in World Heritage List. Likewise, our assets reached 18 those we added to intangible cultural heritage list. Traditional Turkish Archery, which is a very important value of our culture, took its place in that list since this date. In this process, I would like to thank to everyone who made great effort in related works with a great attention”.
N. Bilal Erdoğan, President of World Ethnosport Confederation, who made important statement in this press conference, presented examples from works of the World Ethnosport Confederation in this line by once more stating importance of traditional sports and success of UNESCO.