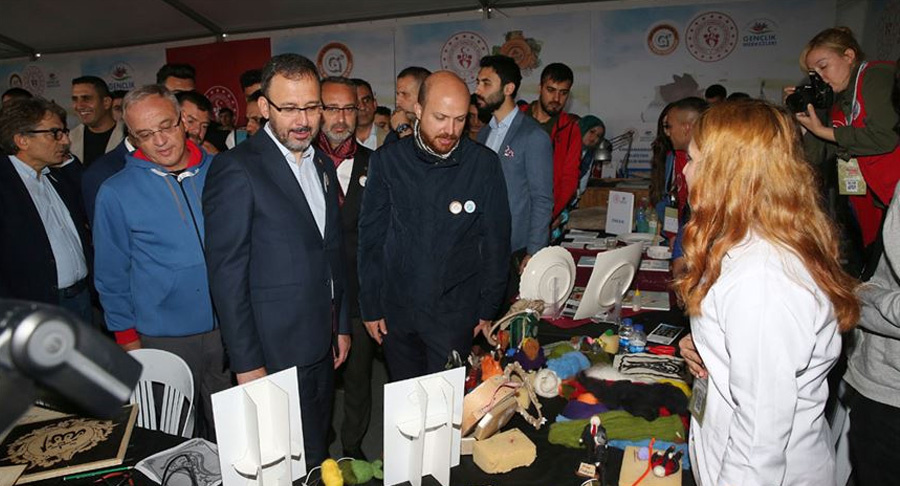 Minister of Youth and Sports Mehmet Muharrem Kasapoğlu visited the Ethnosport Culture Festival, whose four years of organization of the World Ethnosport Confederation (WEC) in Istanbul.

The festival, which was held at Atatürk Airport under the slogan "Pilavdan dönenin kaşığı kırılsın(Never give-up)," started its activities on the third day.

Minister Kasapoğlu, who came to the festival where Anadolu Agency is the Global Communication Partner, WEC President N. Bilal Erdogan toured the booth of the Ministry of Youth and sports with WEC vice president and Hakan Kazancı, President of the Turkish Federation of traditional sports branches.

Minister Kasapoglu, who examined the handcrafts made by young people in youth centers, received information from authorities.

Speaking to the press after his trip, Kasapoglu said: "the fourth Ethnosport Cultural Festival is significant for both our country and the world sport and culture. It is a festival that has become more and more popular every year and has the pleasure of our people and young people. Congratulations to everyone who contributed. I want to thank WEC, its distinguished president, its managers and the Federation of traditional sports branches and all the institutions that have helped., "he said.

Emphasizing Turkey's young population, Kasapoglu said: "Tradition is critical with the future. It is not possible for societies that break from tradition and don't know their past and culture to succeed in one area. Our young people's interest in this issue and our gratitude is very pleasing for us. With 20 million young people, Turkey is one of the countries with the most youthful population in the world. As a ministry, we are mobilizing all our facilities to ensure that our young people are a generation equipped with their traditions and Customs. "he said.

Mehmet Muharrem Kasapoğlu, who conveyed that they saw the hand products of youth centers, said, "the theme of the festival this year is "Pilavdan dönenin kaşığı kırılsın(Never give-up)". It was designated as'. We will combine tradition with the future. We won't back down at this point. This is why we say "Pilavdan dönenin kaşığı kırılsın(Never give-up)". Sport, of course, is one of the main themes of the festival. There are 12 branches of traditional sports. It is gratifying for us that many departments receive the attention and gratitude of our young people." he expressed his opinion.

At the festival, traditional handcrafted products of various regions were presented to the appreciation of the citizens.

Citizens who came to the festival showed an interest in products such as copper, leather, tiles, pottery, weaving, as well as hand-made Mother-of-pearl, embroidered furniture, harnesses, and handmade knives on display in city tents.

Three at the festival. Fatah wrestling is being held. The organization has 300 wrestlers, 40 of whom are headhunters, tied arms, and fighting.

At the 4th Ethnosport Cultural Festival, Tika introduced many country cuisines to visitors.

Among them Yemen, Ukraine, Sudan, Senegal, Tunisia, Tanzania, Uzbekistan, Pakistan, Mongolia, Kosovo, Georgia, Palestine, Albania, Gagavuzya, Azerbaijan and Moldova as well as traditional regional dishes they open the stands of the countries on the promotion of products made.

While those who came to watch the Festival events enjoyed tasting the food of these countries, they also make long queues in front of Uzbek pilaff stand.