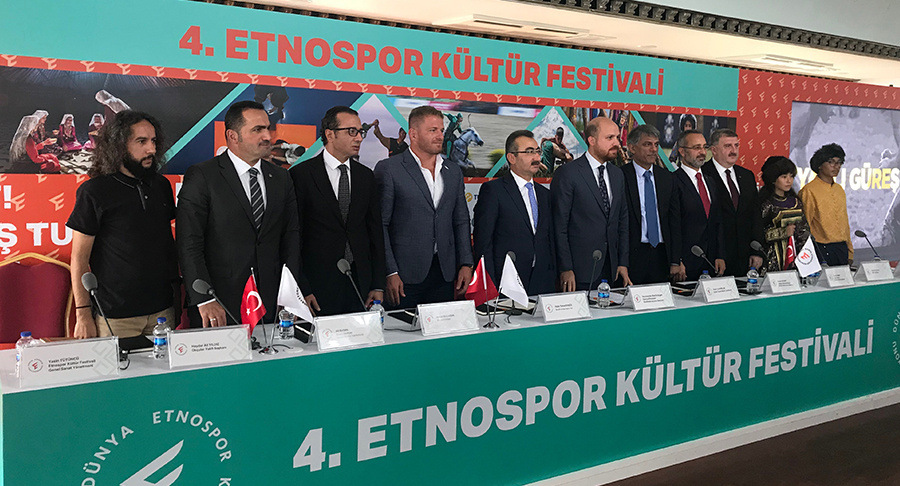 Fourth Ethnosport Culture Festival was Introduced with the Press Conference

Ethnosport Cultural Festival, the Fourth of which was organized by the World Ethnosport Confederation to revitalize traditional sports, was presented with a press conference held in Sepetçiler Kasrı.

To help, support, and promote the development of Ethnosport understanding of people who form national integrity from different societies and cultures throughout the world, to protect their sporting and cultural originality. This year, the 4th edition of the Ethnosport Cultural Festival, which has contributed a great deal to the gathering of traditional plays with large audiences, will be held with the participation of 16 countries.

Nearly 1 million participants visited the festival, which will be held at Yesilköy Ataturk Airport between October 3-6 last year. The festival will feature enjoyable and challenging challenges in 12 traditional sports.

"Nearly a thousand athletes will compete."

Speaking at the press launch of the 4th Ethnosport Cultural Festival organized by the World Ethnosport Confederation, president of the World Ethnosport Confederation N. Bilal Erdoğan said, " We organized the 4th Ethnosport Cultural Festival in Istanbul. We do it at Yeşilköy Atatürk Airport. Close to a thousand athletes will compete. There will be show matches. We made the first 3 in May. We're going to do the 4th and probably the 5th in the fall. Because the month of Ramadan corresponds to May; We decided to make this festival for 2 years in late September and early October. We preferred Yeşilköy Atatürk Airport as the location. Because, as you know, the decision was made to make this nation garden. It was decided that this large area, which is located in a very central point of Istanbul, would be used for the various social needs of Istanbul citizens. We think that this area will be used for such activities after that, and as an organization working in the field of traditional sports, it will certainly serve to permanently survive the functions that serve traditional sports in the nation garden which will be established."

"We are concerned about the loss of the cultural wealth of the world."

Expressing that they aim to be eco-friendly with Universal Sports, Erdogan said: "there is also a goal in our traditional sports to be human-friendly and eco-friendly. Therefore, it is possible to perform traditional sports year-round with eco-friendly structures or preparations without any need for construction in the places used as a nation garden. We are worried that the world is going to monochrome. We are worried about the loss of the world's cultural wealth. We think that in the course of the Westernization adventure that started with the Industrial Revolution, monetization in the world has strengthened, cultural riches have been lost, decreased, and this does not serve World Peace, it has triggered inter-community hostilities and unrest in the world. For this reason, we think that sports will contribute to the cultural richness of the world and its color. In this, not only as a confederation based in Istanbul, we are working to keep traditional sports in our territory but also in all parts of the world alive. This year's Ethnosport Culture Festival will be a guest of our country is Argentina and its long-established traditional sport Pato," he said.