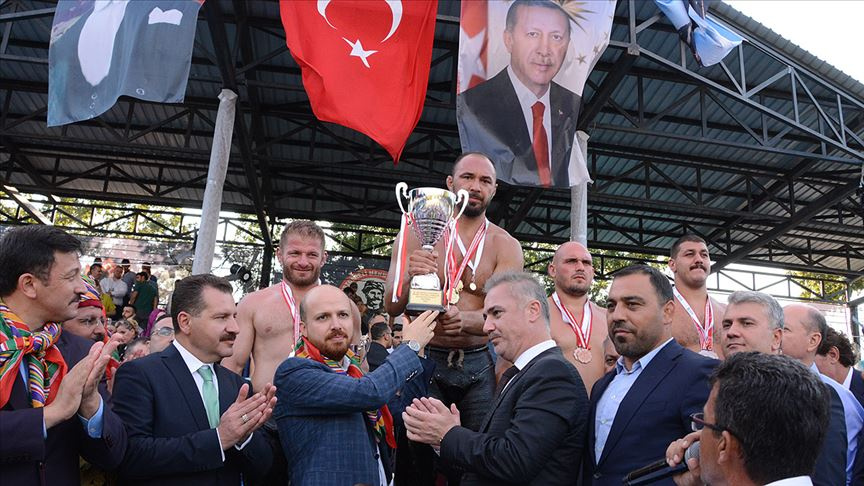 Ali Gürbüz Took the Title of

Ali Gürbüz won the title of "chief wrestler" in Kurtdereli Oil Wrestling Conquest who is "pin down" his rival İsmail Balaban in the scoring section.

Balıkesir Metropolitan Municipality and Karesi municipality hosted, kurtdereli er Square organized the organization, 70 of which are head-tall about a thousand wrestlers participated. Ismail Balaban, Tanju Gemici, Ali Gürbüz, and Ertuğrul Dağdeviren, who defeated their opponents in the quarter-finals of the contentious competitions, were the names who entered the semi-finals. Ismail Balaban and Ali Gürbüz, who beat their opponents in the semifinals, fought for the first place in the final. Ali Gürbüz, competition opponent Ismail Balaban'u scoring section " key " as the owner of the golden belt Kırkpınar then won the başpehlivanlığı Kurtdereli Oil Wrestling.

Trophies, medals and prize money were awarded to those who won the titles in wrestling, which was watched by President of the World Ethnosport Confederation (WEC) N.Bilal Erdogan, Deputy Minister of youth and Sports Hamza Yerlikaya, and many other citizens. WEC President Erdogan told a Reuters reporter after the competitions that citizens showed intense interest in wrestling held all over Turkey. Erdogan, wrestling performed in many categories, he said: