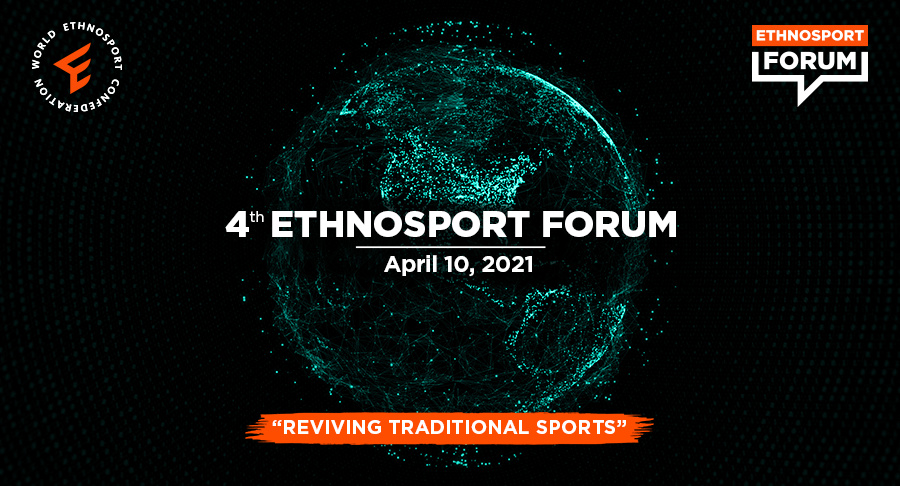 Continuing its activities for popularizing and increasing the awareness of traditional sports and games, the World Ethnosport Confederation (WEC) is organizing the 4th Ethnosport Forum under the motto “The Revival of Traditional Sports.” The Forum will take place online on April 10, 2021 with participants from all over the world.

From its establishment onwards, the World Ethnosport Confederation has maintained its non-stop efforts to have traditional sports and games become current, to have them survive, and to increase awareness of them throughout the world. Many cultures that have remained stuck in the dusty pages of history have come to life through Ethnosport events thanks to the events that have been carried out around the unifying power of traditional sports and games, the sports and games wherein the common values of humanity are found.

Aiming to contribute to humanity around the four principles of tradition, respect, solidarity, and peace, which have universal worth, the World Ethnosport Confederation will organize the 4th Ethnosport Forum, in which participants from all over the world will take part. The short-, medium-, and long-term goals of traditional sports and games will be discussed at the forum, as well as determining the strategies for reviving these cultures.

The forum will be held online and attended by state officials, federation representatives, and academicians from more than 60 countries, as well as by 19 corporate member representatives who have maintained their activities in connection to WEC. The Honorable Recep Tayyip Erdoğan, President of the Republic of Turkey, and World Ethnosport Confederation President Necmeddin Bilal Erdoğan will give the opening speeches at the Ethnosport Forum, which is being held for the fourth time. Participants will be able to monitor the Forum in six different languages on digital stages that have been specially prepared for them. The Ethnosport Forum, which will last for one day, will take its place among pioneering works in the world in terms of participant diversity.